When I was in my twenties, living in San Francisco and working for KQED, the public television station there, I began shooting with that first Bell & Howell camera.  I would drop off the exposed 100′ rolls of film at one of the smaller film labs in town – usually the one that would charge me the least for developing these my first experiments with magic.

I would arrive at the lab a few days after dropping the film off exactly when the film was scheduled to be ready. Excited to see my new footage doesn’t describe how I felt. The pick-up room had a familiar smell of chemicals I recognized from developing still film.  I have a theory that film laboratories universally had conspired to build into the picking-up-film process a waiting period where all customers were forced to wait while the semblance of a “search” for the footage too place.  It was all planned out to be just long enough a wait to make you think your film was lost. Long enought to worry that maybe no image came up in the processing.

I used to hate that delay that happened all the time.  Like at a laundry where they have to match the ticket number to the right pile of laundry, they’d take my receipt and scan the shelves piled with miriad stacks of film cans with all manner of different labels on them.

“Hey, Joe.” Calling to the guy in the other room. “You got dailies for Reuben?”

“I put ’em out there yesterday.” 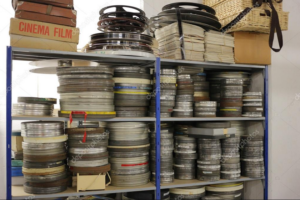 “I think that’s my roll two rows over four down.”

Once I held the can, I’d find it virtually impossible to delay looking at the film then and there. (What was I going to do, get back on my motorcycle and drive back to Berkeley and project the film on my funky projector calm as a cucumber?)  I’d often open up the can while still settling the payment and talking to the technician, attempting to engage in the peaking process while still standing there.  I’d remove the aluminum top to the round can of film and open the black lightproof paper that would cover the film inside. Now the smells of the recently used chemicals would be at their most powerful.  I was hooked on the smell.

Making Mistakes Is The Quickest Way To Learn

I would never know what to expect: it is possible to make mistakes in many ways when shooting: the exposure needs to be quite accurate – could be off and the whole image would appear black if underexposed or transparent if overexposed.  The film could be scratched.  Or it might have missed the precise threading required in the camera to allow the film to pull smoothly through at 24 frames per second.  The lab could make a mistake and the image could also be ruined. Expectations run extremely high. It’s a kind of stage fright. The opening up moment was like being six years old and tearing open the biggest Christmas gifts from under the tree.  The top comes off.  Then the tiny piece of tape at the head of the roll of film.  I’d then unravel the first couple feet of film passing the part where it was invariably overexposed because that would be the part that was threaded into the camera in daylight.  Even the first images at the beginning part of the roll that were always blown out overexposed would be exciting to see as clues to things to come.  Even though they’d have been overexposed, there would be distinct short blown-out frames of film less than an inch long each.

I’d unravel the film long enough to see the first real images.  “Pleae be there.  Please be there.”

For years, I’d pay special attention when shooting at the beginning of a roll of film because I knew that these would be the first frames that I’d see at the lab doing my rip-open ritual, so I’d take special care to really like the first images that I would shoot.

Then the image that I was waiting for.  Hoping for. The moment of recognition was always the same: In short: Totally amazing!  As I held the stinky piece of fresh celluloid coated in chemical smells up to the light, I’d see that first tiny, sharp, bright image in there.  “Oh, yeah, that’s what I shot first the other day!”  it would be like a million Christmases and Birthdays rolled into one.  I held in my hands a kind of miracle.  A combination of alchemy and magic and power and creativity.  I’d feel like God surveying his work after creating life.

Lessons, Thoughts, and Memories from a Veteran Filmmaker