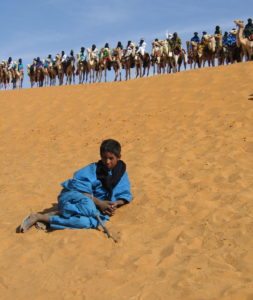 Each day on pretty much any project that I might get involved with, there are unanticipated found moments that magically appear like glittering gems.

That photo above of the boy in blue just kind of happened. It wasn’t set up in advance or even anticipated. I just saw it out of the corner of my eye and luckily had my still camera by my side. He didn’t even ask for a fountain pen after.

All projects have unknowns built in. Good and bad. The decision to get involved in a new project requires having faith. Faith in the Film Gods. Taking on a project – especially one out of the country – brings with it responsibilities and knowing that unknowns will present themselves regularly.  Saying “yes” is like jumping off a diving board at night trusting in the promise that the safety of a pool of water awaits below. It’s all a gamble.

The secret is that the Film Gods will (almost) always show up to support that that leap into the night.

The Sufis have a saying: “Trust in Allah…but tie your camel.”

The project for which this picture was taken turned out to be one of the few that didn’t work out.  More on the Mali film later.

Going from one project to another through the years has afforded me a kind of graduate-level film course for which I’ve been paid to attend in the field. I started making films back in the day when film schools were still fairly uncommon and the learning never stops. Each film became another course in another fascinating subject where I got to step into the textbook and watch it unfold while reading it in real-time.

It’s an amorphous process this filmmaking thing; seemingly more of an art than a science with a whole lot of heavy lifting thrown in.

Now, Remind me Which Truth You Are Referring To …

The Butcher of Lyon wins an Academy Award
Scroll to top