At 4 AM, we stumbled off the rented transport bus that we’d contracted at the border of Peru and Bolivia.  The drive to La Paz lumbered and rattled thru the night and seemed endless.  I guess because we were driving through the mountains where there were hardly any people or lights the view out the window next to my seat was particularly black;  a deep, rich, velvety black.  Every time the driver shifted into a lower gear — which was continually — there was a loud grinding sound and a high pitched engine noise that startled me out of the beginnings of sleep.

Except for a brief rest stop along the way, we hardly spoke to one another.  The bus was too loud to hear one another anyway.  The previous week of shooting in Peru had been exhausting in its own unique way and this prolonged drive from Lima to La Paz was billed as a chance to relax a bit in preparation for an upcoming busy week of filming in Bolivia where Nazi Gestapo chief of German-occupied Lyon, France, Klaus Barbie last lived and worked.

While the road had been winding with sharp turns around bends that never felt safe, I didn’t realize that we’d also been going uphill the whole time.  When I took my first steps off the bus in front of our hotel in La Paz, it hit me like a ton of bricks.  I’ve got just one word for it:  13,500 feet.  Who knew?

There were five of us traveling together from Peru.  Pablo, a soundman from Lima, Nena, a production assistant and translator- ish, John the American producer, myself and of course Marcel.  We needed to hurry to our rooms because the plan was to meet up the next morning with Peter McFarren, a writer/journalist who lived in Bolivia and had written a lot about Klaus Barbie.

Marcel’s earlier film, The Sorrow and the Pity about French collaboration between the Vichy government and the Nazis during World War II is considered to be one of the most important documentary films ever made.  In 1969, the film won the Oscar for Best Documentary Film.  The film had a powerful influence on me when I saw it.  And when it came to making decisions in my own life at a time when the Vietnam War loomed large, I took the film’s powerful underlying theme about individual responsibility and personal choice very seriously.  Partly as a result of watching his film, I’d decided to do everything possible not to have to be a participant or supporter in any way of such a stupid war.

The Sorrow and the Pity blew a huge hole in the fairly common belief that the French had largely been resistance fighters against the German occupation.  The film had been banned in France for many years because of its unpopular message.  And on some level, I was worried that one day Marcel or someone like him might make a film about Americans like me making similar choices when it came to the war in Vietnam.

Almost 20 years later and Marcel is at it again with a new film.

I was honored to be with him this time around, to be there up close and friendly to watch him at work.  Now, he was following the trail and the post war antics of former Gestapo officer Klaus Barbie and fugitive from justice who was given the moniker – if that’s what you call it – “The Butcher of Lyon”.  Barbie was reportedly responsible for the murders of more than 10,000 Jews and French Resistance fighters during the Nazi Holocaust.

We came to Bolivia where he was openly hiding and where he had taken up residence under a pseudonym.  At the end of the war, he never really missed a beat: he was recruited as a death squad trainer and an anti-Soviet Cold Warrior.  At the time that we were tracing his steps thru South America, Barbie was in prison in France about to be tried for crimes against humanity.  Ironically, the trial was going to take place in the same hotel in Lyon where he had set up his Gestapo headquarters at the Hotel Terminus, right next to the train station in Lyon and from which it was widely suspected that he ordered the deaths of so many people.

Marcel would say that people would ask him why he was making a film about such a “minor” monster like this guy.  They meant that Barbie wasn’t a “famous” Nazi.  “Why not let sleeping dogs lie?”  Barbie was not as famous a Nazi as many of the others about whom much had been written and films had been made.  His answer was, “How many people do you have to kill to qualify?”

Altitude sickness hits everyone differently.  Luckily for me, I was unaffected because, as there wasn’t anyone else on the crew to help me schlepp the equipment everywhere.  Oh, others offered to help.  They almost always offer to help.  And I believe they usually mean it.  Just never works out that way.

What Is Your Name?

On the morning of day three, Peter brought us to the Cafe La Paz where Barbie used to frequent and we discussed the interview we were about to have in two hours with Barbie’s former bodyguard.   Peter showed us the table where Barbie liked to sit with his back against the wall.  After breakfast, we set up for interviewing with Alvaro de Castro, a tall handsome Spaniard who seemed proud to have worked for The Butcher of Lyon.  Castro was a man with his own fascist political views.  And I think that it was the aspect of his pride and lack of remorse that most attracted Marcel to doing the interview.

Marcel plays a unique role in his documentaries; he often becomes a character in them and his questions are heard and seen on screen.  He is often shown wandering through his films “thinking out loud” like a detective in a film noir movie.

Once we got past the preliminaries before the interview and I adjusted the lights, Marcel asked Castro what normally would have seemed like an easy question: when he had first met Barbie.  His answer surprised Marcel and he was soon off and running: “I first met Klaus Altman in…” Before he could finish his sentence, Marcel interrupted.  Castro was referring to Barbie by his assumed name, the name he’d made up for himself for his life after the war in his adopted country.  His old boss’s name was Barbie not Altman and Marcel was going to be sure this guy understood the difference.  This was important to Marcel.  Strangely, wierdly altitude induced important to him.

“Well….,” said the bodyguard with a kind of shoulder shrug.  As if to say “what’s the difference anyway?”

Marcel interrupted again, now more loudly, “What was his NAME?”

Marcel, now helping.  In softer voice this time as if coaxing in a wild animal: “His name was Barbie.”

“What was his NAME?” Marcel asked again.  I was actually beginning to feel a little dizzy.  Marcels voice seemed to take over the room.  It mixed in with the invisible energy brought on by the extreme high altitude of the city.

Castro still didn’t appear to know what was happening.  He appeared unshaken by Marcel’s strong presence.  Not what you’d expect from someone trying to do a simple interview with you.  He may have been working hard to keep his cool since he was getting paid a little money for the interview.

“Now,” Marcel said, like a lawyer moving in for the kill, “Let’s start over. Tell me when you first met Klaus Barbie.”

Hesitantly like a 6 year old trying to read a difficult passage in a book, “I – first – met—(he paused to think…then smiled, proud to have gotten the lesson right, “Klaus Barbie in 1959.”

I was shaken behind by the intensity of the moment.  Castro may have missed the significance of what Marcel was doing, but no one else in the room did.  Marcel was saying, in effect, “take responsibility for the man for whom you worked by at least getting his name right.  Not the made-up name that was a lie but the name that belonged to and was associated with so many murders.  That’s the first step.

Take responsibility for your own actions and deeds.

In “Hotel Terminus,” America as well as the Vatican are incriminated in the sadistic world of Klaus Barbie following his “success” as a captain in the army working to bring about Hitler’s Final Solution.  Images of him on trial in France were a bit haunting to look at.  On the one hand he looked like somebody’s grandfather.  At the same time, he looked like some kind of predatory bird.  If we had ever had the chance to interview him, I’m sure he would have known and used his real name.

The film was a reminder to me of an especially important and timely theme for all of us: that people in positions of authority will abuse their power if they think they can get away with it.

Barbie on trial in Lyon, France

WWII is often depicted as a battle won by good forces over evil.   Klaus Barbie was an important chapter in the story.  Although eventually convicted of Crimes Against Humanity, unlike the bodyguard who finally got it straight, Barbie never seemed to feel he had done anything wrong at all.

For me, the Second World War mostly seemed like some distant event created before my time by people very different from me.  But with Marcel telling the story, I was able to see the living impact this history on the present events.  And for a second time in 20 years, he made me think about my own life in a profound way.  I had the image of Barbie being tried in the same building where he’d tortured so many people.  I couldn’t get his image out of my mind;  that of a kindly looking grandfatherly person who thought that if he just changed his name, his unspeakable acts would go away.

Others must have been impacted in a similar way.  Hotel Terminus won the Cannes International Critics Award and the Academy Award for Best Documentary. 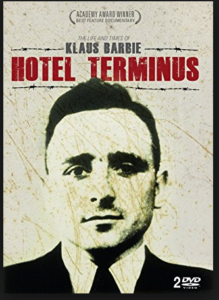 Want to join the discussion?
Feel free to contribute!

Now, Remind me Which Truth You Are Referring To …
Scroll to top